"...Only God can help you now."
-Herobrine, once he has cornered an innocent miner.

The Story of Herobrine

Herobrine originated from the story and pictures of a miner, who brought it to the attention of the public. He stated he had spotted the character building strange tunnels and structures, and stalking him across the map.

Herobrine first became famous when a few miners, who were doing a broadcast, staged a run-in with the mysterious man. Soon after, other miners began staging these run-ins with the mystic Herobrine. These were soon discovered to be hoaxes, until one miner confronted Notch, and asked if Herobrine was real. Notch pondered this thought, and replied "maybe."

In all versions, Herobrine is a human ghost entity, with the only variable being his intentions and construction abilities, or lack thereof. 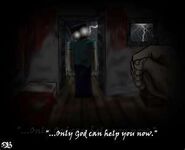 Herobrine closes in on a Miner

Herobrine's Skin
Add a photo to this gallery

Retrieved from "https://mcplayers.fandom.com/wiki/Herobrine?oldid=4530"
Community content is available under CC-BY-SA unless otherwise noted.